As a child, my mom sent my siblings and I to Jamaica for summers. Aunt Judy’s house is where we stayed. As soon as I stepped foot into her driveway, the sweet aroma of mangoes from the trees outside floated around me. Aunt Judy was never an avid cook; but her kitchen was filled with cooks. I saw Escovitch Fish prepared for the first time when my aunt’s friend brought over fresh snapper to fry for us.

Seasoned with spices, she put the whole fish in a frying pan filled with oil. The oil bubbled around the fish as she added the scotch bonnet peppers. The air immediately filled with a pungent peppery smoke. Afterwards she sauteed the peppers and onions with vinegar to make the warm pickle. The fried fish laid flat on layer of paper towels soaking up the oil. The fish were transferred to plates and smothered with the pickled peppers. Escovitch Fish is a classic Jamaican dish that I love preparing. I’ve officially become an expert at maneuvering around those tiny fish bones. 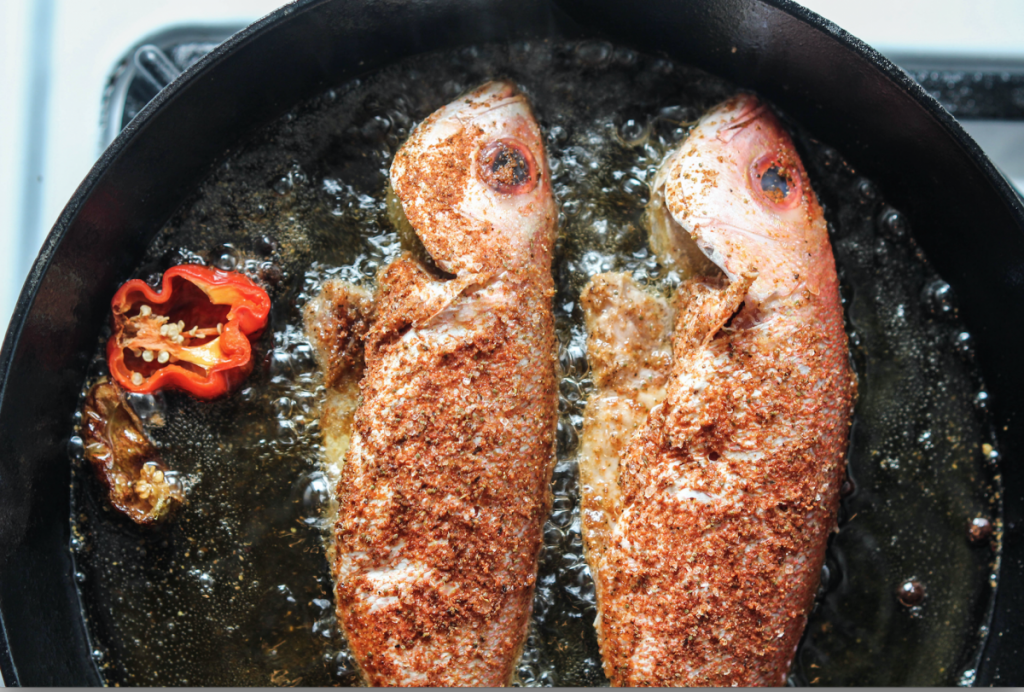 When we traveled from Kingston to Ocho Rios, I remember grabbing food from street merchants. We stuck our hands out the car to buy bags of guinep, peppered shrimp, mangoes and coconut water. Guinep is a peculiar fruit. I snapped the leathery skin open to reveal a pulpy flesh reminiscent of lychee with notes of a sweet and sour. The fruit was mostly seed, so we devoured a bag quickly. It was the perfect snack for traveling cross country.

Roads were narrow, filled with potholes, and the drivers drove fearlessly around mountainsides. We ventured through Fern Gully, a magical winding road covered in thick fern that was once a river. The starking sun rays bounced everywhere as it peaked through the greenery. When we reached the Ochie, we made a stop at Dunn’s River Fall, the most popular waterfall in Jamaica. I would grab the hands of my brother and sister, while the fresh water gushed over our faces as we climbed the slippery waterfall rocks. Memories of Jamaica will always make it my piece of paradise.

Rinse and clean fish with juice from lemon. Pat dry. Cut 3 diagonal lines across the sides of each fish.

Season the outside and inside cavity of the fish with the spice mix.

Fill a large frying pan with oil, about ½ inch deep, to high heat.

Place fish in the frying pan away from you. Adjust the heat between medium and high to avoid the fish being burned.

Fry for 5-6 minutes on each side. The fish should be slightly brown to blackened.

Remove fish from frying pan and allow to drain on a plate lined with paper towels.

Saute for about 5 minutes, you want the vegetables to keep their body and crunch.

Add the vinegar, and cook for another 5 minutes.

Place onions and pepper sauce over the fish.

Serve with Jamaican Rice and Peas.

I am a current Food Studies Master’s candidate at New York University exploring the intersections of food and culture. I publish a blog entitled, The Seasoning Bottle (seasoningbottle.com) where I fuse Jamaican and Southern dishes. I was born and raised in Atlanta, Georgia and I covet southern comfort food.

If you’re a jollof fan in Toronto, you know how hard it is to get jollof delivered to your home. Thankfully the game is…